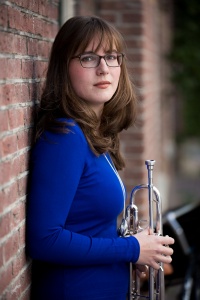 Loes van den Hoven (1987) started to play the trumpet at the age of 9 at the music school in Amersfoort (The Netherlands). She discovered her passion for classical music when she played “Ein Deutsches Requiem” by Johannes Brahms with chamber orchestra Flehite Sinfonietta. When she was 15 years old she made her debut playing solo with that same chamber orchestra in the Trumpet Concerto in E-flat by J.B.G. Neruda.

From 2003 until 2010 Loes studied (Preliminary course and Bachelor) Classical Trumpet at the Conservatory of Amsterdam with Frits Damrow, former solo trumpeter of the Royal Concertgebouw Orchestra. Since finishing her studies, Loes has played with many different kinds of ensembles. Thus she performed contemporary compositions, played some concerts with salsaband Zulemax, joined brassband Amsterdam Brass as a solocornettist and played at the dutch classical music festival Wonderfeel with the Wonderfeel Festival Orchestra. Furthermore she regularly plays concerts with the orchestras Philharmonia Amsterdam and Het Promenade Orkest. Loes joined Cobla Amsterdam in 2015.

In addition to performing as a musician Loes gives music lessons and works -on a project basis- as production assistant and producer in the (classical) music industry.